END_OF_DOCUMENT_TOKEN_TO_BE_REPLACED

You know where you can stick him!

Get yours after the jump: https://gumroad.com/skullforgestudios?sort=newest#gjjgN

Baby Yoda has been stealing Star Wars fan’s hearts in Disney’s The Mandalorian, and in the process has become the internet’s favorite new meme generator. While we’re still waiting on the deluge of official merchandise and swag for the adorable little guy, one Star Wars fan has made it possible to bring Baby Yoda into your favorite tabletop game of Star Wars: Legion or Warhammer 40K, and yes, the miniature is just as adorable as you would expect. The Baby Yoda mini was created by Skull Forge Studios, and you can get the 3D printed miniature now on ShapeWays (via SpikeyBits).

The 3D printed miniature features Baby Yoda riding in his adorable little hover vehicle, and he can be ordered in Smoothest Fine Detail for $11.50. The miniature is within 1:46 and 1:48, and can’t be printed in any other scales.

Now, the miniature is unofficial, so it does not come from Fantasy Flight Games, Disney, or Games Workshop (for Warhammer), but if you’re looking to add Baby Yoda to your tabletop, this is currently the only way to do it. You can check out the adorable little miniature here.

If you’re unfamiliar with Star Wars: Legion, the game is a tactical miniatures game that has players facing off against each other as the Rebellion or the Empire (in the base set), but there is also another base set that is focused on the Clone Wars era.

Find the full article after the jump: https://comicbook.com/2019/11/30/star-wars-baby-yoda-miniature-legion-40k-tabletop/

Skullforge Studios also recently created a mini for other characters from the show:

(All miniatures shown are from Mel Miniatures)

Tusken Raiders 6 guys with guns and 1 Jedi Sharad Hett. You can buy both a complete set and individual miniatures

Get yours after the jump:

The shoretroopers can be tricky as there are several versions based on ranking each with unique details and a lot of them.

Here is a quick guide to helping you in your painting if canonical Shoretroopers are your goal:

One note, the expansion’s unit leader would be the Squad Leader, not the Captain. You could proxy a Captain Shoretrooper though as an Imperial Officer upgrade if you were so inclined.

“Not as clumsy or random as a blaster; an elegant weapon for a more civilized age.”
—Obi-Wan Kenobi, Star Wars: A New Hope

Not only does Star Wars™: Legion invite you to build a unique army of iconic troops, vehicles, and characters from across the Star Wars saga, it also gives you the opportunity to put your own personal touch on that army by painting and customizing your miniatures. For some, like Matthias Gruettke, this involves modifying the miniatures themselves, including the weapons they carry into battle.

Lightsabers are some of the most recognizable weapons in the entire Star Wars galaxy, wielded by noble Jedi and ambitious Sith lords alike. Rather than paint the lightsabers on his miniatures, Gruettke carefully replaces their blades with LEDs that reflect the soft glow of an ignited lightsaber. Join him today as he breaks down the process of bringing these iconic weapons to life in Star Wars: Legion! 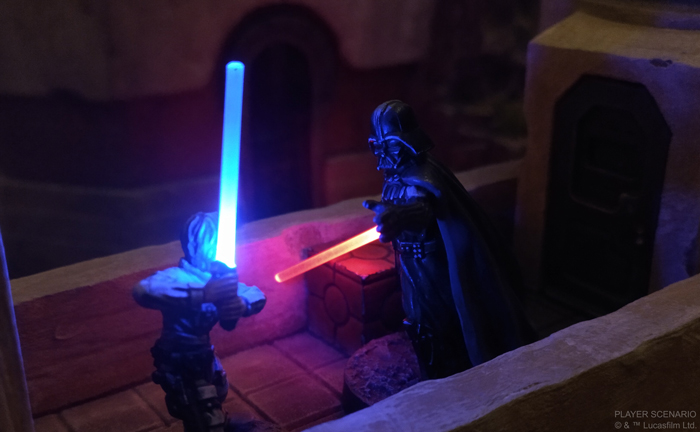 When I saw the first pictures of Star Wars: Legion miniatures, I immediately thought how hard it would be to paint the blade of the lightsaber. I mean, it’s made of pure energy. How do you paint pure energy? There are some really talented painters who can do this for sure. But this illusion works mostly in dioramas where you look at the miniature from a certain angle. On the battlefield this is a totally different matter, because you and your opponent look at the miniatures from serveral perspectives.

That’s why I have come up with another solution. Why not use light to power the blade of the most iconical weapon in the Star Wars galaxy?

In this article, I will show you how to use LEDs and acrylic rods to light up your Force users’ weapons. It won’t be the easiest work, but with some patience you will make it!

Use the 3.0mm drill bit to drill a hole in the middle of the Legion base using the hand drill. Be careful not to drill in your hand or any surface you won’t like to have holes inside. The hole doesn’t have to be placed exactly in the middle, just somewhere around the center of the base.

Clean the drill hole edges with the hobby knife so no plastic is sticking out from the surface or the backside of the base.

Drill another hole near the outer edge of the base with the 1.5mm drill bit.

Now, put the 3mm neodymium sphere magnet in the hole in the middle and the 5 x 1.5 x 1mm neodymium block magnet in the smaller hole at the edge of the base. Ideally, the holes are so small that the magnets barely fit into them. If they are the proper size, you shouldn’t have to use super glue to hold the magnets in place. If the holes are too big and the magnets won’t hold up by themselves, use only a really tiny drop of super glue to hold them in place. It is absolutely important that the areas sticking out of the upper side of the base as well as the areas that aim towards the inside of the base are not covered with glue, because you need the bare metal surface of the magnets as contacts for the battery and the conductive paint. 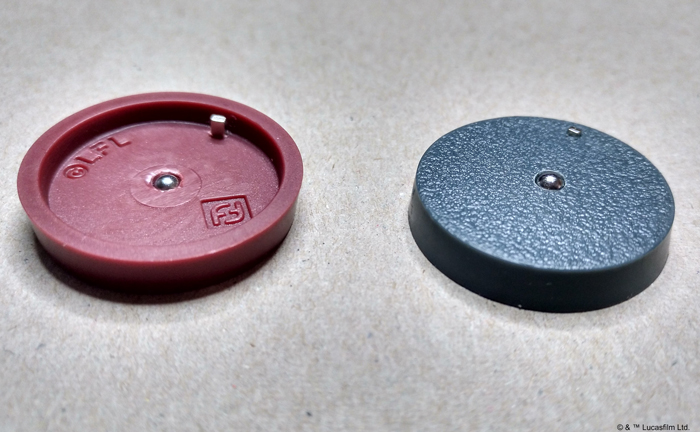 If you use a red or green LED, you’ll have to install a resistor, otherwise you risk burning your LED! To do so, expand the the smaller edge hole with the 0.5mm drill bit carefully and stick one end of the 56 ohm resistor into it. The wire piece of the resistor should be as close as possible to the magnet. Glue the resistor body part onto the base and cut the ends of the resistor wires with the hobby knife. The base should now look like this: 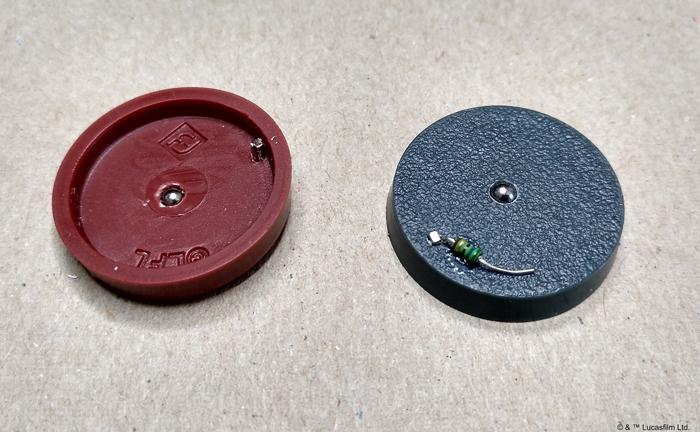 Repeat the process on the other foot. This time, paint a wire line from the magnet in the middle of the base to the left foot and leg and then to the left arm hole on Luke Skywalker or above the belt for Darth Vader. WARNING: Do not cross the wires! The LED won’t work if the two painted wire lines contact one another before they reach the LED contacts! So don’t be hasty. Be one with the Force and paint the wires carefully. If you cross the wires, use the hobby knife to scratch a bit of paint off and separate the wires again. 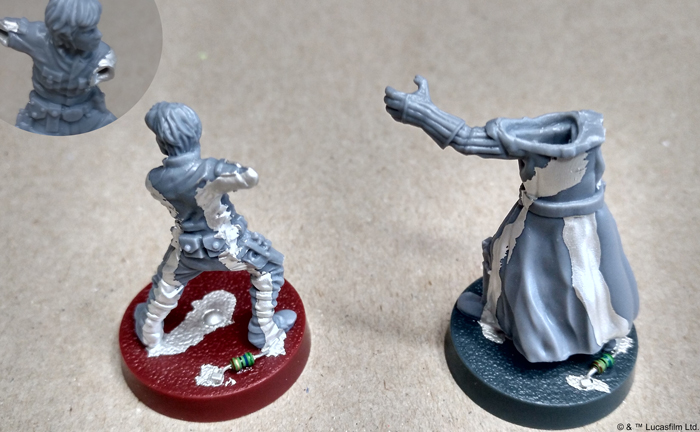 Now we come to the interesting part—installing the LED. Cut the blade from the hilt of the lightsaber of your miniature, but don’t throw the blade away yet. Use the 0.5mm drill bit to drill a pilot hole inside the hilt. Be sure that the hole sits exactly in the middle of the hilt. Drill about 2-3mm deep inside the hilt. Then progressively widen the hole with the 1mm and then the 1.5mm drill bits. Dry fit the arcylic rod inside the hole. If the rods fits, you can go to the next step.

Change to the 0.5mm drill bit again and drill another hole on the backside of the hilt where the palm touches it. Try to drill towards the existing hilt hole to get a connection. After you break through, insert the pre-wired LED from above and shove the wire throught the hilt. Use the super glue to tack the red and black wires to the inner underside of the arm(s). Pay attention not to glue your fingers together or to the part of the miniature.

On Luke, lead the black wire along his left arm and the red one along his right arm. Wrap the wire ends around the pins that are used to connect the arms with Luke’s body. Cut the wire and use the hobby knife to scratch off the red and black isolation layer of the cable until you see the metal of the wire. Try to scratch this layer off the wires that are wrapped around the pins.

On Vader you can already glue the arm to his body. 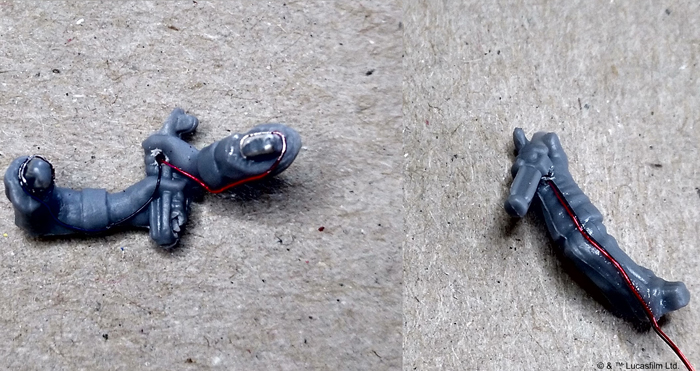 Apply a bit of the conductive paint on the pins of Luke’s arms and let it dry for about 5 minutes. Then apply super glue on the edges of the arm holes on the miniature’s body. Don’t use much super glue, the holes should not be filled up with it! Then stick the arms on Lukes body. After the super glue has dried apply some more conductive paint around and inside the pits of the cut.

If you are doing Vader, just tack the black wire to the silver painted seam above the belt and the red one to the painted seam below the belt. Cut the wire and use the hobby knife to scratch off the red and black isolation layer from the cable until you see the metal of the wire. Do this on each wire until you have scratched off about 5mm of isolation. Then, use the silver conductive paint and go over the unisolated cable again. Be sure to paint over all of the super glue to get a nice connection. 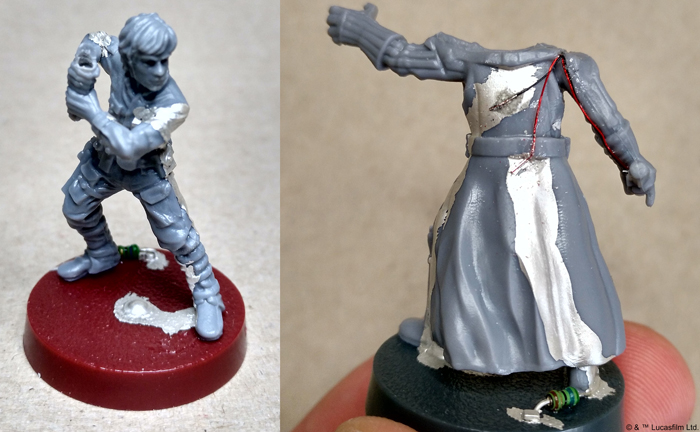 Now, use the blade you cutt off the saber to measure the lenght of the acrylic rod you need. Add 2-3mm to the total length (that will go inside the hilt) and cut the acrylic rod. If you have some fine sandpaper available, use it to sand the upper cutting edge of your blade. You can use the hobby knife for this as well, but sandpaper would be better.

Now, stick the rod inside the hole in the hilt and apply the button cell battery. The ‘rough’ side of the cell battery (minus pole) must adhere to magnet in the middle of the base. If the blade lights up, well done! You are a true master of the Force! 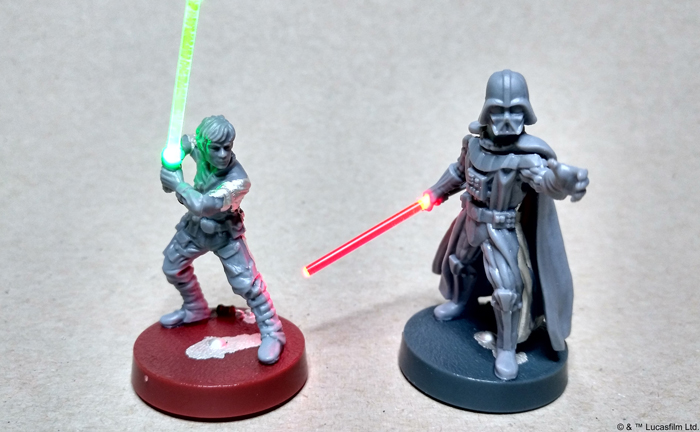 Jordan of Skull Forge Announced today that come September you’ll be able to buy his awesome minis directly from him at a reduced cost from what Shapeways charges. He’s also helping Imperial Terrain with their Kickstarter.

Here’s what he has to offer this month:

END_OF_DOCUMENT_TOKEN_TO_BE_REPLACED

For Skull Forge Studios’ July Releases we get an awesome batch of some grizzled old war veterans.

“I’m not going to leave you hanging for July! got a couple of goodies to hold you over while I’m out traveling around Europe next week. The Desert Hermit (hint hint) wont be available on shapeways until I can see how a bundle of sabers prints with their cheaper materials, however all of these models and more are now available at http://gumroad.com/skullforgestudios