“What difference does it make who started the war and who only wants to end it? No side is free of fault. It takes two to fight.”
–Tee Watt Kaa, Star Wars: The Clone Wars

Starting today, you can experience Star Wars™: Legion in a whole new way using a brand-new format! This new way to play significantly reduces the size of armies, inviting players to adapt their playstyles and develop creative new strategies. Learn about how these intense, smaller-scale engagements alter the dynamic of the battlefield as developer Alex Davy highlights the tactical advantages that this format brings to the table.

Skirmish games are played over the course of five rounds on a three-foot by three-foot battlefield, utilizing a new deck of twelve battle cards optimized for small-format play. This is the Star Wars: Legion experience stripped down to its very essence, a framework without an ounce of fat on it. Even so, it requires just as much tactical acumen, careful planning, and risk-taking as a standard game of Star Wars: Legion. I believe that players will have plenty to discover with the depth of this format!

The Skirmish format also offers new strategies and new opportunities for creative army building. Force-wielding heroes and villains are mightier than ever, but gobble up an even bigger percentage of your overall army size. Deadly short-range units like Fleet Troopers and Scout Troopers can come to grips with their foes more quickly, and heavy vehicles like the AT-ST and the AAT Trade Federation Battle Tank can impact the game in a major way from the start of the very first round. In short, it’s a whole new wargame to explore! 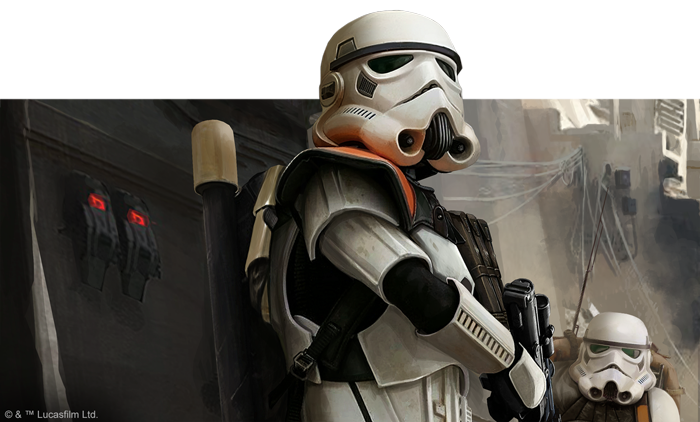 Ultimately, it is my hope that this format offers a great option for new players, veterans who want a new way to play, stores that want to run events but have limited space available, and anybody and everybody whose busy lives leave them with limited time in which to roll dice.

All of the information you need in order to start playing Skirmish games of Star Wars: Legion can be found in this new document (8.3 MB) that covers this exciting format. Assemble your army today and lead it to victory!