Join us as we take a look at what FFG Live has in store for July!

But until then, there are still three FFG Live streams coming your way, starting July 9th! 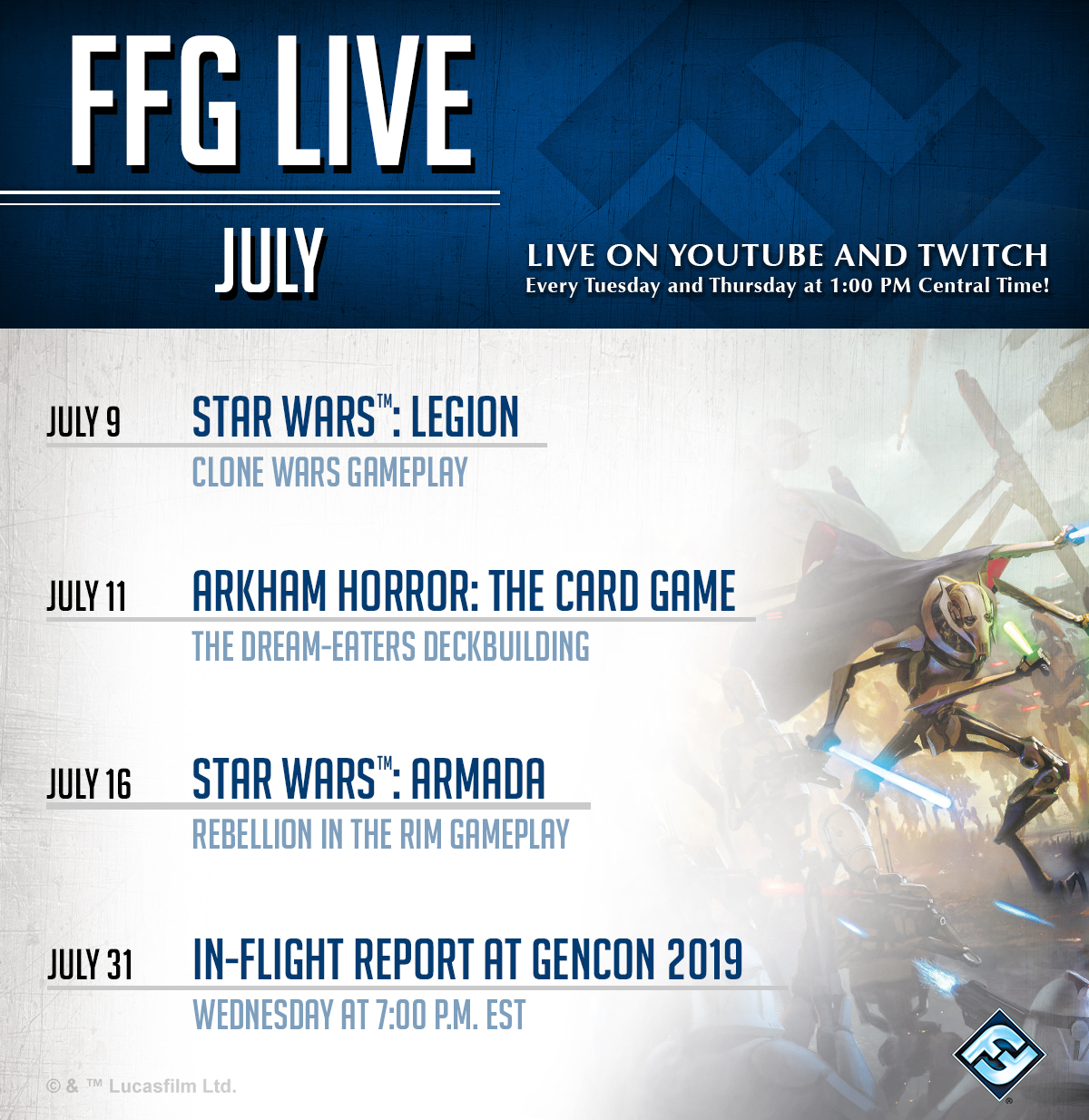 On July 9th, join developers Alex Davy and Luke Eddy as they explore the Clone Wars Core Set for Star Wars™: Legion! Come discover the power of the Republic and Separatists in an all-out skirmish for supremacy! END_OF_DOCUMENT_TOKEN_TO_BE_REPLACED

Don’t forget to pick up your pre orders today!

So no need to rush out to your local shop today. Sabine and Bossk will be available for purchase tomorrow.

Jordon Cuffie of Skull Forge Studios teased some new minis he’s been working on this summer:

“This release starts my official (and slow) move over Gumroad!

Check it out at: Gumroad.com/skullforgestudios

It will take some time get to all of my files onto gumroad so please use discount code GROWINGPAINS at check out to receive 35% off your order of stl’s!”

END_OF_DOCUMENT_TOKEN_TO_BE_REPLACED

Star Wars™: Legion players, you must secure these prizes!

Today, we’re excited to reveal all of the Grand Championship prizes to you. Remember that the Top 4 players will also be invited to the next Star Wars: Legion World Championship. Do not let the armies of the enemy stand in your way! Dominate the battlefield and through victory, these prizes can be yours.

This past weekend Luke Cook brought it home winning the first ever Legion World Championship.

Here’s some all of the cards I collberated on with Jay Shelanskey of The Fifth Trooper for his Star Wars Legion tournament The Northeast Open. Basically I drew the characters, he did all the rest 😆. I love the oldschool baseball card feel! He’s a super talented guy. Stay tuned.

END_OF_DOCUMENT_TOKEN_TO_BE_REPLACED

Conflict permeates the galaxy. Everywhere, territories have been marred by the ravages of war. Now, a tipping point has been reached and the finest commanders of both the Galactic Empire and the Rebel Alliance must assemble their armies to clash in an epic finale that will bring this chapter of the Galactic Civil War to a close.

On June 22 and 23, you can join the action and get a ground-level perspective on how the final battles of Star Wars™: Legion unfold at the 2019 World Championships. In Roseville, Minnesota, eight of the top players from the AdeptiCon High Command Invitational will gather and compete for the ultimate prize. Be sure to tune into our Twitch channel or our YouTube channel to catch all of the action. END_OF_DOCUMENT_TOKEN_TO_BE_REPLACED

The Sabine and Bossk Operative Expansions along with the Down AT-ST status have been switched to “Shipping Now” on the Fantasy Flight Games USA website.

Though the US status page is notoriously unreliable, usually once the status has be changed to “Shipping Now” that means the items will be on store shelves in two weeks time.

So it looks like the US will finally be getting their shipment of Down AT-STs along side Sabine and Bossk on June 27th.